Make Your Courses Unforgettable with KnowledgeBumps

Written by Steve Bilow on July 2020 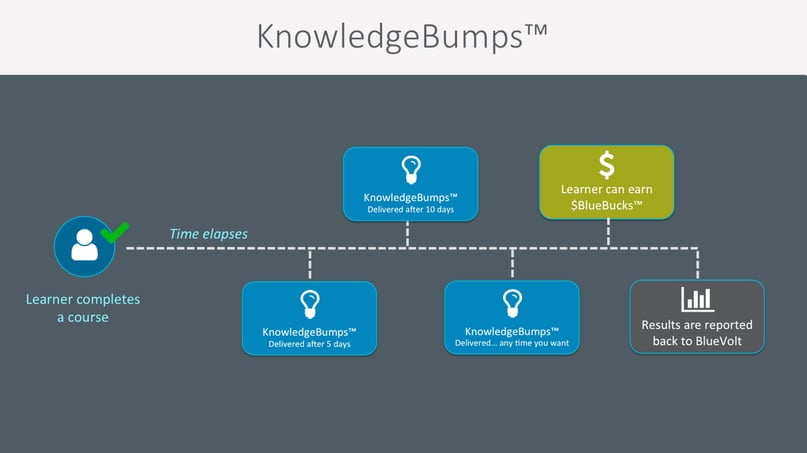 Without repeated reinforcement, a learner will forget much of their newly gained knowledge within 24 hours of completing a course. But provide one or more memory-jogging references back to the course material and most of it will be retained simply by association. That’s why the new KnowledgeBumps™ functionality being introduced by BlueVolt this summer is so innovative and powerful. This simple concept is a game-changer when properly implemented. We will have lots to share about that in the coming weeks.

It’s Been a Good 135 Years for Learning

For now, take a step back in time. Suppose it were still 1885 and all we knew about knowledge retention was what Hermann Ebbinghaus wrote in his seminal paper on what became known as the “Forgetting Curve”. We would have to believe that every learner loses half of what you teach them within the first day after learning it. Three days later, 75% would be gone! Forty-five minutes of every hour of learning would be left behind. To understand why, consider Ebbinghaus.

135 years ago, the German psychologist Hermann Ebbinghaus studied how the brain creates and retains memories. He learned that the human brain has a predictable mechanism to free up memory. We have come to call this the “Forgetting Curve.” According to Ebbinghaus:

A Discovery Worth Remembering

Ebbinghaus did not just study forgetting. He also wanted to know about remembering.

When Ebbinghaus offered learners repeated reminders of the information they learned over increasingly long periods, he could flatten the forgetting curve. Ebbinghaus called this “spaced repetition” but 135 years later we simply call it retention.

This is the science behind KnowledgeBumps™!

You can send all the reminders you want but without feedback, you have still solved only part of the problem. At BlueVolt, we solve the other part by allowing several types of KnowledgeBumps™, one of which is a quiz. In addition to simply sending out reminders, a “bump” can also ask questions. Ask a question, provide feedback, and further reinforce retention. Employees, channel partners, association and buying group members, all get immediate feedback. They are engaged to think. They retain even more.

Another Reason to Have a Great Summer

Remember to see KnowledgeBumpstm in action.

Easily Share your Courses Through the Vast BlueVolt Network

Ready to Get Started?